A new permanent exhibition devoted to the world-famous "father of genetics" Gregor Johann Mendel, was opened by the Mendel Museum of Masaryk University in the middle of February 2009 in the grounds of the Abbey of the Order of St. Augustine in Brno, where Mendel - scientist and monk - made his epoch-making discoveries. This modern exhibition intends in particular to attract children and young people to Mendel's legacy.

After Masaryk University took over the Mendel Museum in 2007, the new management came up with a brand-new conception. The present exhibition, with its modern design, is a result of these changes; its intention is to involve all the visitor's senses. There is one dominant object in each exhibition room – including a huge pea-shaped showcase, original beehives and metal statues of monks. According to designer of the exhibition Tomáš Pavlovský, each of these emphasise a particular period in Mendel's life. Every visitor is introduced step by step to Mendel's work in the fields of cultivation, pomology, beekeeping and meteorology. The explanation of the principle of heredity, which Mendel invented by hybridizing a pea, is something which should not be missed.

"We wanted to involve all five human senses, so the exhibition includes sound effects like bees buzzing and period music and the smells of honey and beeswax. The most difficult thing for us to include was the sense of touch – this the visitor can use by means of  touchscreens and by opening drawers with exhibits, and most importantly by planting a pea. Everyone should come to plant a pea, then come back after a few weeks and see how it is growing and perhaps even eat it," says Mendel Museum director Ondřej Dostál. "But sight is still the most important sense," Pavlovský adds.

To find out more, go to: www.mendelmuseum.muni.cz 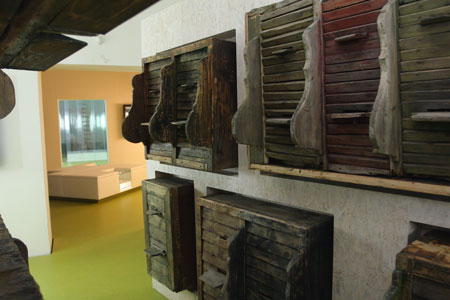 There is one dominant object in each exhibition room – e.g. original beehives, that introduce to Mendel's work in the field of beekeeping. Photograph: Petr Preclík