Universities agree on further development of the CEITEC project

The agreement provides for a new project structure in accordance with documents issued by the European operational programme Research and Development for Innovations, which should finance the CEITEC project. The project also has a new executive director, Tomáš Hruda, while its scientific part has become the responsibility of a scientific director; for Masaryk University this will be Jaroslav Koča, who will be responsible for the natural sciences and medicine; at Brno University of Technology Radimír Vrba will be responsible for the area of advanced materials and technologies. 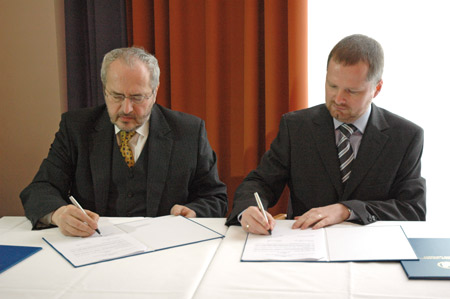 The general agreement was signed by the Rectors of both universities Petr Fiala (on the right) and Karel Rais on 3 March 2009. Photograph: David Povolný.

For better coordination of the project, the universities have established two interdisciplinary workplaces to operate at university-wide level: for Masaryk University this is CEITEC MU (for biomedicine and biotechnologies). CEITEC VUT has been established by Brno University of Technology.

The Central European Institute of Technology project envisages a modern centre of scientific excellence in Brno which would enhance significantly the scientific and innovative capacity of the Czech Republic and have a powerful influence on the regions of South Moravian and Vysočina.
The project has been developed with the cooperation of Brno's universities, institutes of the Academy of Sciences and departmental research institutes.

To find out more, go to: www.ceitec.cz