I believe in maximizing the use of technology

On 21-24 September, in co-operation with Brno University of Technology, City of Brno, Brno Centre for European Studies and Union of Czech Mathematicians and Physicists, Masaryk University in Brno was organizing the international symposium in honour of the outstanding theoretical physicist George Placzek, who was born on 26 September 1905 in Brno and died on 9 October 1955 in Zurich. George Placzek belongs among the most important physicists of the 20th century, setting an example not only through his discoveries, but also by the extraordinary stimulating style of his scientific work. Details dealing with life and scientific work of George Placzek as well as with the symposium are available on the symposium website http://dumbell.physics.muni.cz/placzek. In the international symposium was participating also a nephew of George Placzek Mr. F. Anthony Placzek, businessman living in California, who we asked to answer our questions.

What are your impressions of the just finished symposium in honour of your uncle?
I was very touched by the outpouring of respect and admiration the people of Brno and the Scientific Community showed towards my uncle and his family. Prior to the Symposium I had only a limited understanding of the role he played in the formation of modern nuclear physics and the early research that went into the development of the atomic bomb that wound up in friendly hands. Imagine that without the unselfish efforts of George Placzek and his many colleagues what would have happened if either Hitler or Stalin had been successful in creating this earthshaking weapon. Our world would have been completely different. We have a tremendous need to recognize this fact and be very thankful of the outcome.

When your uncle tragically died you were only sixteen. What do you remember from meetings with him?
I remember my Uncle as a kind and caring individual, reaching out to others, but overwhelmed with his scientific work and its ramifications. I think it was the understanding of some of these ramifications that forced him to take his life at such an early age. He was a serious man, but with a good sense of humor. What did him in was the understanding of the ramifications of his studies and it troubled him to the core.

Science and business are rather different spheres of life. What is your main principle of life as a businessman?
Honesty, integrity and doing my clients work for them before they expect it. Also, I believe in maximizing the use of technology whenever possible and always looking for new ways to accomplish the objective with better results.

You met also with some of Masaryk University representatives. You discussed several topics, among others also the new university campus. What is your opinion about the project?
As far as the new campus at Bohunice, I did not have enough time to study it in sufficient detail. Perhaps when I return to Brno in the near future. In the meantime I must comment on the use of modern technology. It is so very important to use it in modern science, education and commerce. However we must remember to never loose the human factor. Machines and electronic communication do wonders, but we must make sure that their applications and processes have a humanistic element. Remember H. G. Wells! 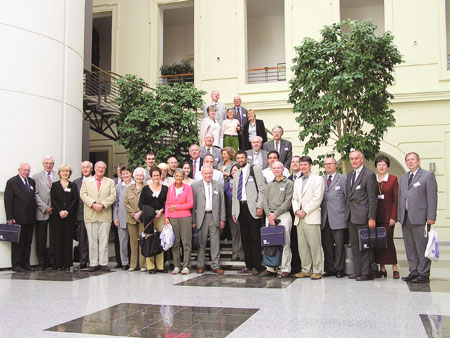 Symposium in Memory of George Placzek was organized at the occasion of the 100th birthday of George Placzek and the 50th anniversary of his passing away. Eminent Czech and foreign physicists presented their papers about Placzek and the influence he had on the physics as a science, as well as about scientific topics Placzek himself devoted much of his professional career. The nephew of George Placzek - Mr. F. Anthony Placzek (the fifth from the left side of the picture in the white suit) - attended the symposium as well.

What are your general impressions of the city of Brno? Can you compare them with your experience from California?
Brno is a city struggling to create its own identity in this fast pace world we live in. It appeared to me that most of the renovation of its physical plant was in the public sector. The private sector should be encouraged and motivated to recapitalize their physical plant in much the same way the government sector has done. This must be done with the good use of tax credits, incentives and public/private partnerships. As far as my perspective as a Californian: California has a “can do” attitude where risk taking is rewarded. Failure is not looked down on. Instead it is considered a learning experience. We learn from our mistakes and are encouraged to try again until we succeed.

I thank you very much for your answers, wish you all the best and am looking forward to your next visit to Brno.

Marie Fojtikova,
Secretary General of the Czech Rectors Conference,
Member of the Union of Czech Mathematicians and Physicists