The Prince of Wales received prestigious Great Gold Medal on his visit to Masaryk University, part of His Royal Highness’s four-day trip to the Czech Republic. The medal was conferred by Rector of the University Petr Fiala at the university campus in Brno-Bohunice, where Prince Charles discussed issues related to environmental protection with students from the Faculties of Natural Sciences and Social Studies on 22 March 2010.

Three students presented results of research on the impact of global warming in Antarctica and the monitoring of toxic chemicals in the environment and their impact on health. A revolutionary method for the liquidation of yperite by enzymes, which was patented by Masaryk University, was also presented. Students of the Faculty of Social Studies with an interest in topics including the future of energy safety, population explosion and food shortage, joined the follow-up discussion.

The Great Gold Medal of Masaryk University is awarded to the most distinguished public figures at home and abroad in appreciation of their efforts for the promotion of democracy and the betterment of humankind. Nominees for the medals are submitted by the Rector to the Scientific Board of Masaryk University, which puts them to the vote. Recipients of the medal include Madeleine Albright, United States Secretary of State (in 2000) and Luzius Wildhaber, President of the European Court of Human Rights (in 2004). 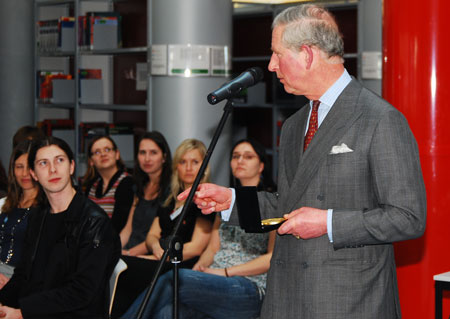 Prince Charles discussed issues related to environmental protection with students from Masaryk University in Brno. After the discussion the Prince of Wales recieved the Great Gold Medal. Photograph: Martin Kopáček.