Delegates from European universities have started their meeting in Brno

Nearly 300 representatives of universities from over 30 European countries have gathered in Brno, Southern Moravia, which was selected to host the autumn conference of the European University Association. Conferences of the EUA, which is the representative body of European universities and national rectors conferences, generally take place twice a year; for the first time in EUA’s history, it is being held in the Czech Republic.
The conference is being organized by six Brno universities, in cooperation with the City of Brno and the South Moravian Region. “The reason why the conference is taking place in Brno is clear – because the Brno universities have already undertaken many of activities which make them engines of regional growth,” explained Georg Winckler, the president of EUA. Nearly three representatives of universities from over thrity European countries have gathered in Brno, which hosted the conference of the European University Association. Foto: Onřej Ženka.
Yesterday, the event was started by series of pre-conference meetings of the EUA Board, EUA Council Members and Secretaries General of National Rectors’. During the meeting of the EUA Council, the delegates discussed, among other topics, the problems of synchronization of higher education systems and standards in the unified Europe. Discussions also touched the topic of economic self-sufficiency and problem of expansion and improvement of applied of research, which would enable closer cooperation between universities and the business sector. In the afternoon session, the representatives of the Czech Rectors’ Conference met with the president of the EUA, prof. Georg Winckler.
The conference itself was officially opened yesterday evening in the Brno New Town Hall. President Winckler reminded the participants of the main goals of the EUA conference – to enable exchange of good practice drawn from different regional examples; to identify instruments and action universities themselves can adopt and implement to enhance their contribution to regional development; to develop strategies for ensuring both local/regional focus and global outreach as components of institutional mission; and to clarify the role of European policies and actions in promoting universities as key partners in regional development. 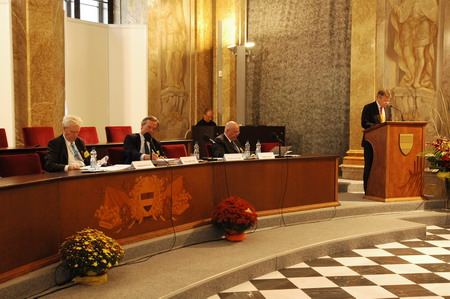 During the meeting of the EUA Council, the delegates discussed, among other topics, the problems of synchronization of higher education systems and standards in the unified Europe. Foto: Onřej Ženka.
As the rector of Masaryk University added in his opening speach, the support of regional development and innovations by the Brno universities is already starting to bring some tangible results, as is for example the the South Moravian Innovation Centre or the South Moravian Centre for International Mobility. „The development of the South Moravian Region is closely tied to the development of the Brno universities, and their work together represents a successful model for close cooperation between public authorities at all levels, public universities and the private sector,” the rector stated.