Student from Hong Kong: Snow? My first experience will be in Brno

One of the first things Shan had to learn in order to survive in the Czech Republic, was how to work the heating. The average temperature in Hong Kong in December is 18 degrees. This year for the first time twenty-one-year old Shan had the opportunity to leave her home city Hong Kong and go abroad. Although Europe was quite an exotic place for Shan, she was not afraid to come there. After managing all the necessary documentation regarding her school exchange, Shan packed her suitcase, got on the plane, and twelve hours later she was ready to start her stay in the Czech Republic. At first she was unable even to imagine what was waiting for her here, nor was she able to pronounce ‘Brno’, the name of the city where the next chapter of her life was about to take place.

A year in Europe, a year in Brno
Masaryk University was selected by Shan because of the large number of English courses in her specialization: Humanities. Despite the challenging task of dealing with a different environment, for Shan studies in Brno are a bit easier than they are in Hong Kong. “At the Baptist University I have to work harder when it comes to writing essays, papers and also home preparation for the seminars,” confesses Shan, who back home sometimes has to stay up all night just to be able to perform well during classes at the Hong Kong Baptist University. In Brno Shan has a little less schoolwork to do, so she dedicates her spare time to exploration of Czech Republic. She takes off with her backpack almost every weekend.

Night life is one newly discovered area – parties in Brno are not as financially demanding as parties in Hong Kong. The usual price of a drink in the megalopolis of seven million people is six to eight Euros. “ Ever since I have been in Brno, I go to clubs once or even twice a week. My schoolmates who chose Scandinavia for their exchange are envious of me for one particular thing – the beer. Czech beer is cheap and tasty and the same time,” smiles Shan.

Snow? I haven’t seen it yet
One of the first things Shan had to learn in order to survive in the Czech Republic, was how to work the heating. The average temperature in Hong Kong in December is 18 degrees. So most student dormitories as well as houses and flats are likely to have air-conditioning but unlikely to have heating, as they have no need of it. As she prepared for her departure from Hong Kong, for the first time in her life she needed to look for proper warm clothes. “I wanted to be ready for my first experience of snow – because I’ve never seen it!” admits Shan.

There were big changes waiting for Shan in Brno when it came to food, too. She has exchanged chopsticks for knife and fork in the student canteen and she keeps having potatoes instead of rice. Adjusting the body and the mind to the new diet requires a lot of patience. “So far I have not handled the food well. I am just too lazy to cook for myself, and in restaurants there is the language barrier,” says Shan, who sometimes ends up eating just cereal with milk or bread. But she is not going to leave it like that. “I’m determined to work on my diet,” she says. 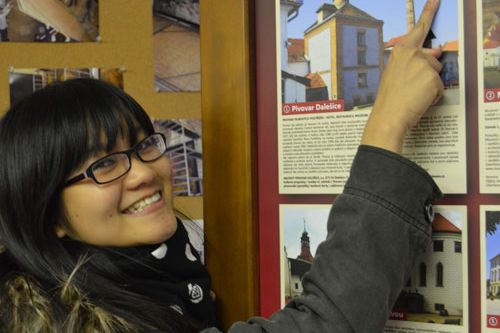 As she comes to terms with cultural, language and eating differences, fortunately Shan is not alone. She has been offered a helping hand by a tutor at the International Students’ Club, as she explains. “Thanks to her I’ve learned more about Czech people and Czech culture. She has taken me to a traditional celebration, we went on a bike trip, she taught me how to use in-line skates. She has also cooked a Czech meal for me and introduced me to many local people.”

As to Europe’s numerous tourist attractions, Shan has already visited Berlin, Vienna and Bratislava and she has explored the north of Italy. She has experienced the atmosphere of a Czech Christmas with her local friends. “I was keen to know how Christmas is celebrated here because in Hong Kong Christmas is not a major feast.”